There are no default functions available in PowerShell for encoding and decoding base 64 strings. However, the .NET libraries contain this. Here are two wrapper functions ConvertFrom-Base64 and ConvertTo-Base64 that you can use to make this easier.

These two functions are a part of my PowerShell $profile, which I will create an article about later.

The beta for the new AADSync tool has been released, and I have been playing around with it a little to discover whats in store and what we might expect from Microsoft Identity Manager (FIM vNext) when that comes out. This is a screenshot heave “try it for the first time and screenshot everything”-article. What I am trying is to see what the new rule editor can manage, and to see whether I can actually manage to provision users in a separate AD forest directly from AADSync.

I made it through the regular installation, which you can see documented somewhat here. This yielded a quite usual DirSync setup, but in miisclient.exe you cannot see attribute flows and filters. This is instead move to the “Synchronization Rules Editor”.

I started of creating a secondary AD management agent. The first ting i notice here is the amount of management agents available by default. This is in strong contrast to DirSync.

Not much to comment on in these screenshots, except for the fact that you cannot configure filters and attribute flow, everything is still FIM. New MA added:

Having a look at the default configure inbound and outbound rules in the new “Synchronization Rules Editor”. 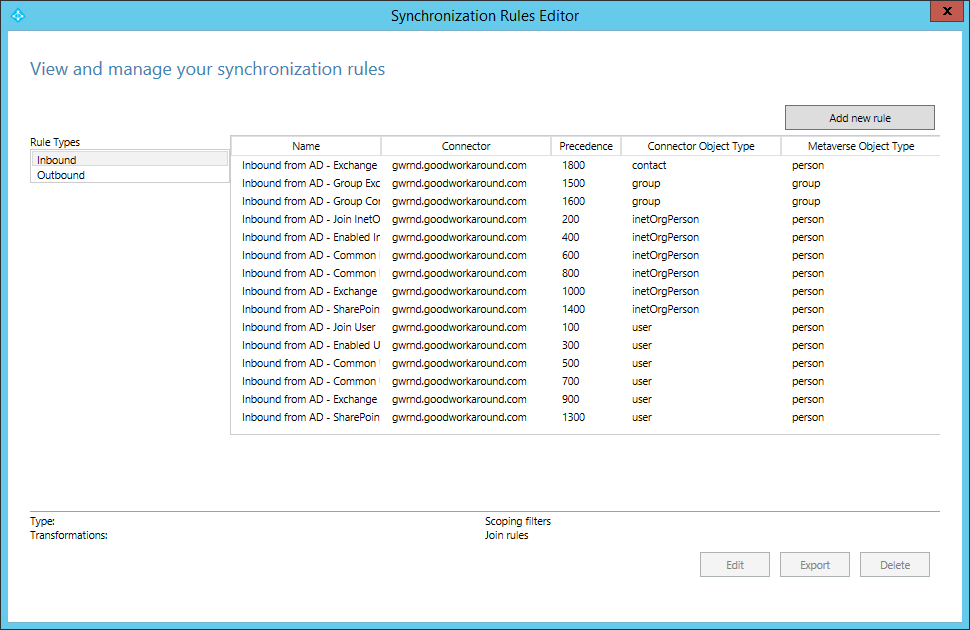 I clicked “Add new rule”, and started on my inbound join rule for my “external.goodworkaround.com” AD, which is my second forest. I just want to see if I can provision user account into that forest based on the users in my “gwrnd.goodworkaround.com” primary forest.

Some new filtering possibilities available, that needed an extension before. However, there is no way of extending it yourself it seems.

Joining pager in AD with sourceAnchor in FIM. 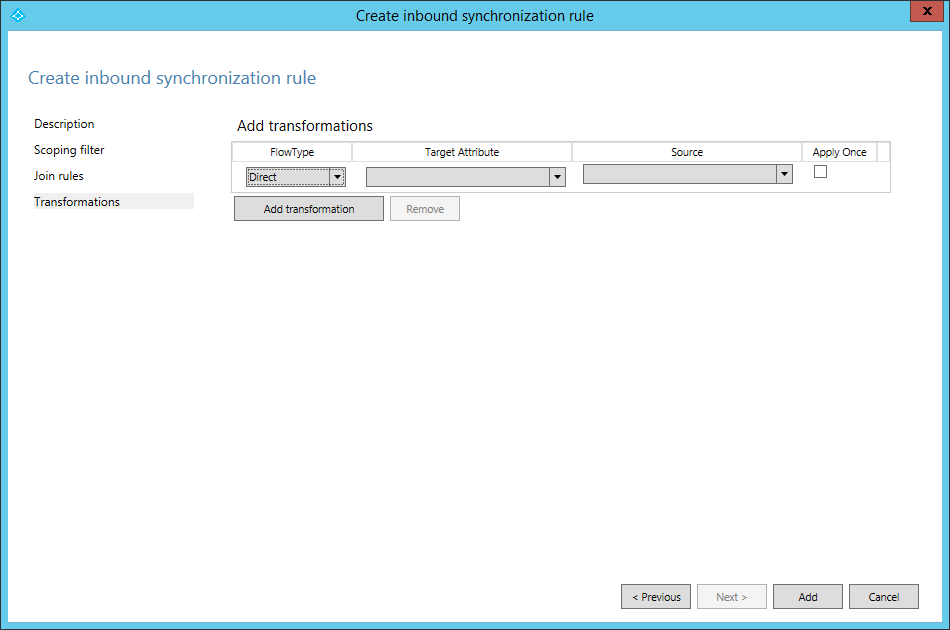 Trying to create a outbound provisioning rule to my “external.goodworkaround.com” forest. 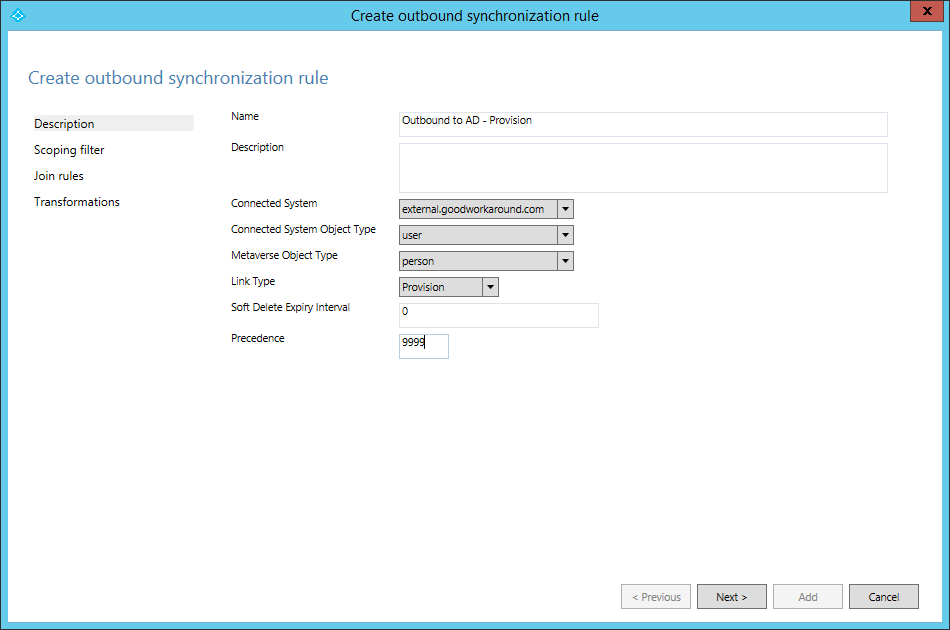 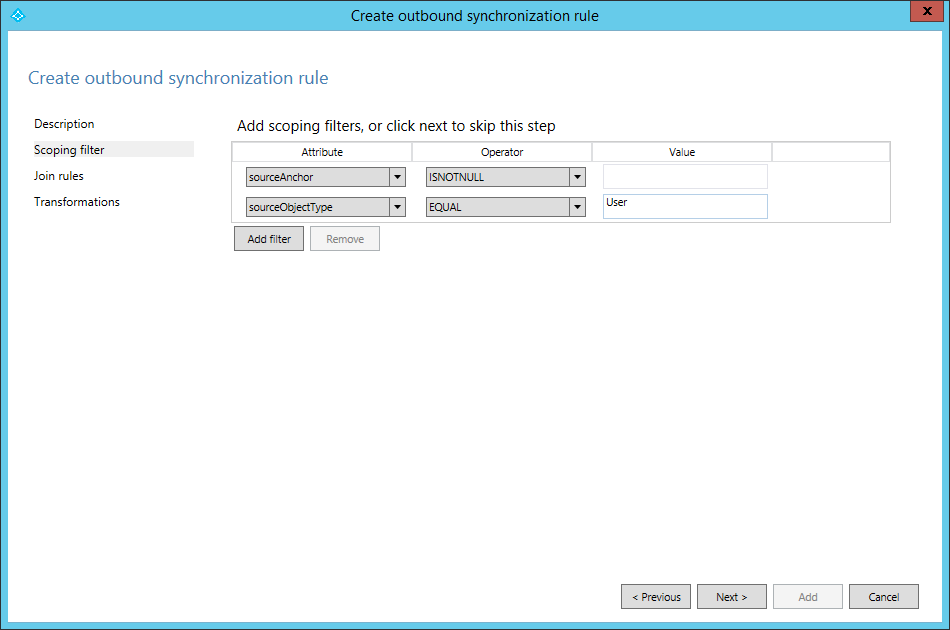 Same join as the inbound rule.

Let’s just try some transformation and see if it works on first try!

Doing a full synchronization on the primary AD yields 71 adds to my second AD. 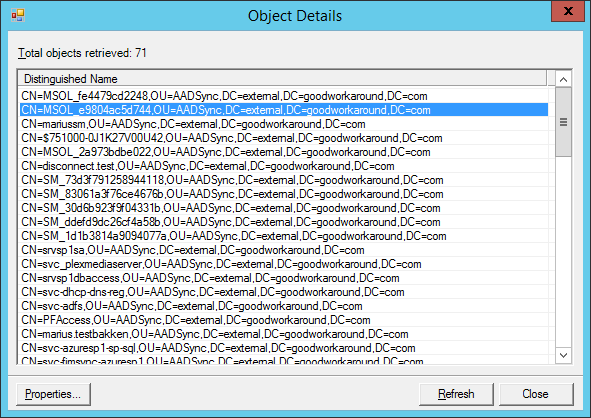 Seems right (wonder if I am missing some very important attribute?)

Some changes not reimported (userAccountControl was wrong value)

I forgot the sAMAccountName too.

Some still giving error, due to sAMAccountName being more than 20 characters. 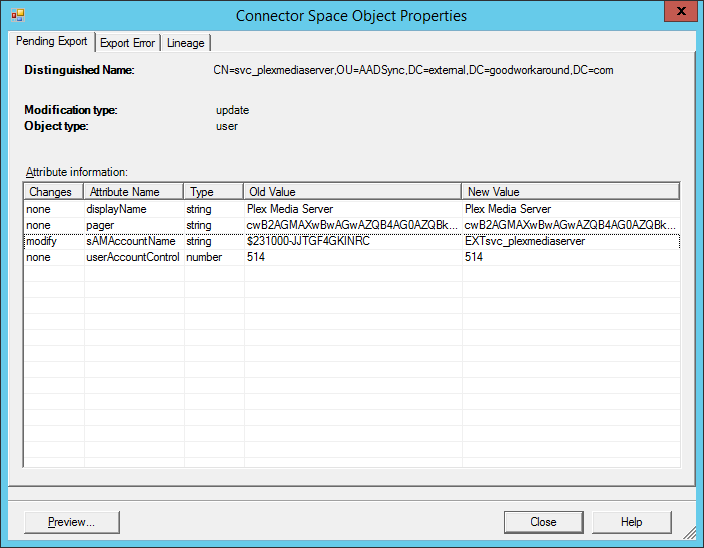 One more thing. The new way of triggering “DirSync” is like below. Also notice that it is automatically triggering my custom added MA!

Looks good (except that it did not Delta sync on my custom MA, only import and export).

That’s it. As I said, just some screenshots to see what’s in store. I am starting to look forward to Microsoft Identity Manager / FIM vNext; hopefully this will be a part of it.